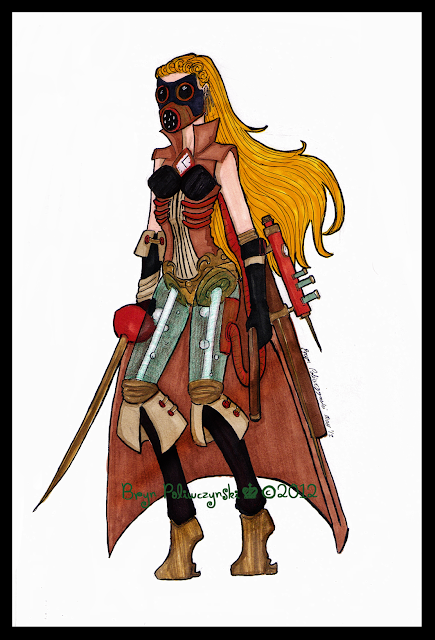 A twisted queen who is unsatisfied with her looks makes an impossible wish for perfection. The result is a collision of several different worlds, bringing together times, places, and people who should have never touched. A constant battle between each confused side is waged for the dominion of the new, distorted world...

Origins | Despite her ominous appearance, Corma is considered a war-hero in her world, her appearance a result of constant battle. In recent times, however, it has become uncertain whether or not any of Corma's brain remains human, and the toll it has taken on her sanity.
Face | A mixture of human and machine. Appears to have once been a young, golden haired girl; whatever remains of her is now hidden behind a mask that cannot be removed.

Torso | It is unclear which parts of Corma are human and which are not. Her clothing appears to be a permanent part of her body's make-up. The hands on the clock in her chest have stopped as a result of the time-freeze created by the colliding worlds.

Arms | Corma's right arm is completely human, so it retains her former skill with the sword. Her lower left arm is machine, allowing her to carry the heavier load of her weapons, as well as use all three guns simultaneously. She has a flintlock in her hand, a shotgun on her arm, and a pressurized steam gun that shoots poisoned needles, mounted on top.

Legs | Both of Corma's legs have been lost in the transition from human to android. Only her bones remain, and are kept in seemingly fragile glass tanks (much stronger than they appear). A tube connects from one leg to her spine, leading to a glass chamber in her chest. Her feet are elevated and animal-like, giving her incredible speed.

Other | Corma can be persuaded to become Noir's ally, or remain as enemies, though Noir must confront her in battle prior to making the decision. If allied, Noir gains support of Corma and her armies, and will no longer have encounters battling the Phantom Regiment's soldiers.  If they part as enemies, Noir will not have the support of the Regiment, and will not only have to deal with Brynhilde's attacks in the final battle, but interference from Corma's army as well.
Art and story by Bryn Poliwczynski. All rights reserved. Any use/reproduction of these works is prohibited.
Posted by Bryn P.